How to Message Guys on Tinder: The Complete Guide

Nowadays, everything can be made through the internet. From payments to social interactions. Especially the latter has been thoroughly covered by apps like Facebook or Twitter, and for the more brave, Tinder. As an app made for your phone, tinder promises to find you everything from your next casual date to the love of your life. Its setup is simple. You create a profile and then you are given a selection of male counterparts to choose from, which you can indicate if you like or not by swiping right and left respectively. In return, they get to select from a variety of girls, and if two people by chance swipe each other then they are matched, and the fun begins. You see, flirting on tinder is a bit different than any other social media because you already know that there is an erotic aspect involved in the conversation. Thus, plenty of girls have had problems talking to men on Tinder. But, you don’t need to worry anymore! We’re here, to provide you all the tips and tricks to get any man you want on Tinder!

Contents hide
1. The Profile
2. Sending the First Message
3. Be Confident
4. Filter Out all the Ones you don’t Want
5. Don’t Speak in a Way you Wouldn’t Want to be Spoken at
6. Make Him Feel Special
7. Don’t Look Desperate
8. Read Also

Even before you get matched with someone and start talking, you need to set your profile straight. Be sure to have more than one picture of yourself, but not too many otherwise it would seem bad. Also, don’t upload any provocative pictures, because you never know who might see them. Another important aspect of your profile is your bio, which you need to actually say things about yourself that might intrigue people into swiping right so that they have the opportunity of getting to know you better. But, keep it short, they are here to date, not read a self-biography of a person they have never met. 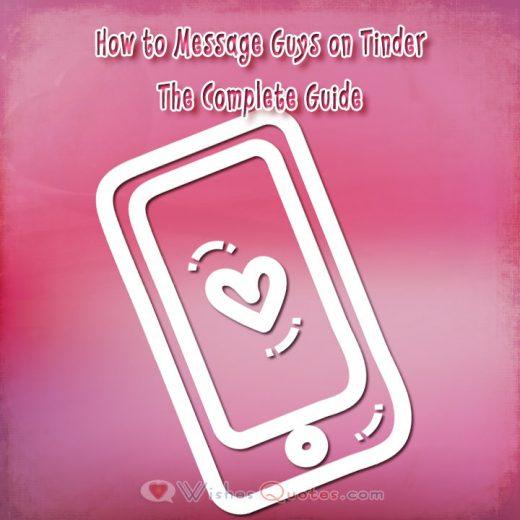 After the match, it’s show time. I know that for the past hundreds, maybe even thousands of years, it’s socially acceptable for the responsibility of making the first move to fall under the male’s jurisdiction. But, being in the 21st century, you don’t have to patiently wait for the knight on the white horse to come rescue you from your castle. I’m not saying to go and be all over him because this is going to be a no-go, but sending the first message will alleviate the pressure from him, and he is guaranteed to appreciate it. So now, the real question starts. What should you send? Well, the easy solution would be to say something standard like “Hey” and pick up the conversation from there, but if you want to do something that will stand out a bit more, some humor or even a quirky statement to grab his attention won’t hurt. Or, you could just say a straightforward, sexualized pick up line, if that’s what you want out of him.

Let’s be clear, you’ve already gotten a match. That means that he likes what he sees. So, it’s your job to let him know that you are equally as beautiful on the inside as you are on the outside. Men are easy to bend to your command if you know what you are doing. But, be careful not to be taken the wrong way, because men can be real vultures. Send the wrong messages to the wrong person, and you are in for a hell of a headache after you’re done rejecting him for the 100th time.

Filter Out all the Ones you don’t Want

As I said, most men are vultures, that have nothing more to offer you than creepy comments about your body and a boring night out. So, in order to avoid all of them, it’s a good idea to find a way to filter out all the “bad” ones by finding a way to quickly learn something about them right at the beginning of the conversation. It could be a fun game like “2 lies 1 truth”, or even plainly asking them yourself.

This would have normally implied to be polite, which it does, but also, it means to not make creepy comments about him, or start off immediately with sexual conversations. When men send the all famous “dick pics” and start making impolite comments about you, it gets upsetting. This is why you need to follow on the same track and talk properly. The person on the other side is actually a living breathing thing, with feelings and emotions that would hate to be spoken to like that. Or, on the contrary, a disgusting pervert that will take your sex joke to improper and disgusting conversations faster than you can spell out your name. So, ladies, be classy.

Men love when you make them feel special, which is actually much easier to accomplish than it seems. Simply paying attention to what they say and throwing a curveball down the line by mentioning some of it, or just by mentioning their names here and there, makes it seems like you are engaged in the conversation, which will, in turn, give him the courage to make all the right moves and not fear rejection that much (assuming that you are not planning to reject him if he does indeed choose to make a move and ask you out).

There is nothing more unattractive than someone desperate for attention and love. For this to work out, you need to keep a relative distance and mystery between you at all times, to keep him intrigued. I’m not saying that you should completely ignore him and don’t even reply to anything he says. But, you don’t want to be responding in mere seconds after he’s sent his message and telling him everything about your personal life and all the problems of your past present and future. This will most likely scare him off, and leave you with a nasty burn when he just decides to stop talking to you.